Good old fashion positive attitude right before the tears b/c I remembered the last time I was there was right before my grandfather passed.

workouts, and just not done a lot of them. I teetered with maybe not doing this race as the last weeks have revealed some major issues still not fixed with my lower back and they’re GREATLY impacting my bike, due to pain. The docs know enough that the possible causes wouldn’t cause further damage, so they said race if you want it’s just going to hurt.  I’d only been training 3 months, coming from walking and nothing else, so I was only able to go the distance of this race during my last big training week.  I knew from the sprint the week before that the hopes of the bike going well were slim, but I still prayed on it and tried to think positive.  Surely I couldn’t be as bad off as last year.

Buoys are where? Where are all the women???

I got my head in the game by Thursday (thanks Sarah), and reread every day of notes in my TP log that gave me things to think about. This course is tough and mentally prepping for what was in store was a necessity.

Getting dropped didn’t take but one stroke

means I now start with all the Open/Elite athletes on swims. Swimming isn’t my fortay, and the lack of women competitors paired with the length of the swim I knew it’d be interesting…just wasn’t aware of how bad! I was a lone girl swimming by myself immediately dropped by them, and anyone passing me too fast to draft off of.  This is extremely new to me. To say I was a tad demoralized is an understatement, but I did my thing and exited the swim smiling, tripping, and breaking my pinky toe. So typical Nicole right?!

The bike started out good, I’d ridden the course prior (against coach orders), so I knew

Never let a friend body mark you, but ALWAYS have fun

what to expect. The 1st 20 mins was great, no pain. Then the poo hit the fan, and the back started. Thankfully this course is hilly which means I didn’t need to spend the whole day in aero. Even out of aero I was hurting, but going aero is semi excruciating. The course has 4,000 ft of climbing in 59 miles I belive, and even though the rain probably worried some, I welcomed it due to the probability of a hot humid run. 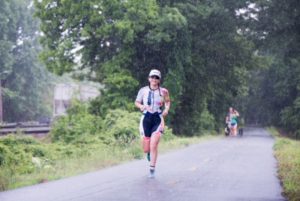 Thankful to be on the run

The Run was a welcome, it’s been the one thing that’s not caused a ton of pain. The 12 weeks of starting from scratch to learn to run again has had its frustrating days, but as usual getting off the bike I felt great. The 1st 3-4 miles we’re good, consistent, and amazing. Insert the dizzies or vertigo, still not sure which. I walked, I tried to jog. I truthfully contemplated quitting. I’d already spent so much time hurting, that adding this new thing to the mix took its toll. I kept reminding myself that what goes down must come up. I made it to the turn around, and the rest is history. I had to walk All aid stations, and just told myself to slow down a bit but try to keep turnover high. For the most part this worked along with salt tabs, ice water dumped everywhere, and coke.

I absolutely LOVE challenging races, the more the better. This one did break me today, it broke my spirit a bit just with the hours of pain. Moving forward I’ll take a little time off from racing until this issue on the bike can be atleast improved. I’d hoped I’d jumped over all hurdles and finally gotten to a somewhat “racing place” again, but that’s just simply not the case. I will be back to being to the competitive level I want. It’s just going to take longer than expected. Fighting and never giving up is in my DNA, so don’t count me out.

Until then I’ll try to keep things updated on the medical situation for those who may run into similar issues and need help.

So how did I fair today? 12th overall and first Open Masters (I was the only one who showed, haha!). The swim was long, thankfully Bc the finish time really threw me for a loop, I held my own on the bike thru sheer grit, and the run just didn’t have the training time for speed yet. Heat also played a role on the Run, the runs times were unusually slower than normal. 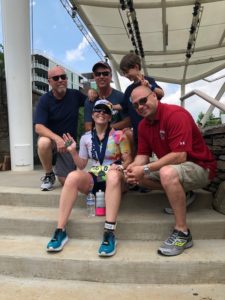 Thank you to Flemming Josephsen for these amazing photos above, Sarah Parker for being a great friend and driving me out to the start, and my family who surprised me at the finish.  They normally only go to Ironman, but what better way to finish the day with the people who have really seen what it’s been like for me over the past year.  Thanks to all my friends, you guys all know who you are, the ones that laugh fuss and join me on crazy adventures just because you know you’ll always have fun.

What did I do the day after? Frigid CryoTherapy and some food therapy at Atlanta Bread Co.