Sunday I managed to find a half marathon trail run where the RD (race director) was nice enough to say I could do day of registration AND bring Jax. I was thrilled, here was the description: 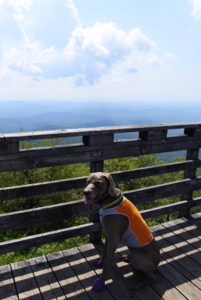 This 11.5ish mile course takes you on 4 miles of pristine single track, crossing 14 footbridges over creeks and small waterfalls.  You will summit Rabun Bald, the 2nd highest point in Georgia, and enjoy the 360 degree views overlooking 3 states.  You will tackle some killer downhill vert and then visit two, with an option to see a third, beautiful waterfalls before finishing.

HELLO! Doesn’t this scream adventure, and I’ve REALLY been missing the trails. I absolutely get giddy with excitement at the thought of a new trail to see. I had a big day of fun Saturday but get up bright and early Sunday ready to play, and here’s how it went:

Put in latitude and longitude coordinates for race site, and manage to drive every rock and dirt road for over 1.5 hours (now 30 mins past the start) only to park my car, ping my location on my phone, and set out to find some race signs.
Roll up on race start 3.5 miles later, meet the awesome race director who informs me the sweeper has already taken down signs but she gives me directions on where to pick up trail and go from there.
The road to the trail is MORE hills and dirt/gravel road (thank gosh jax had his booties on), and I 2nd guess myself a 1.5 up the road and turn back around only to find someone who told me I just needed to go back up and round 2 more corners and I’d be there. (OUCH)
I really thought I was going to kiss that trail sign when I saw it. I was also excited b/c this is where it was single track and tons of bridges and creeks for Jax to get in. I’d just invested in a Ruffwear Jet Stream jacket that a friend from Arizona raved about and it was time to rewet it so it was PERFECT.
Jax couldn’t have been a better dog, I know us parents think all of our kids (yes, I have a human one 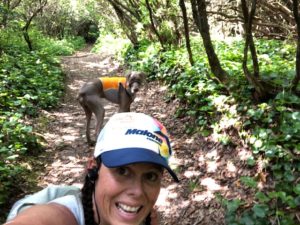 as well) are the best but when Jax is in his element it is just amazing to watch. He constantly checked on me, ran around like his goofy self, slowed when I needed it, and the mom in me beamed with pride and happiness watching him SO HAPPY! The trail was gorgeous! (yes, Susi you were right, I HAD to do that part).
The climb to Rabun Bald was similar in parts to Conquer the Rock (10 mile trail run) but not quite as bad OR LONG. I had to hike it, but the 1views at top were so worth it.

Here’s where I screwed up, I still don’t know where I went wrong, but I made a wrong turn. The turn I SHOULD have made would’ve popped me out on the road where my car was about 2 miles from it. I’d planned on making a left at the road and checking out the wateralls (YOU KNOW, the PRISTINE DON’T MISS WATERFALLS☹) at the end, but when we got to the bottom almost 14 miles later it was clear I was LOST.
Things I learned at this point: 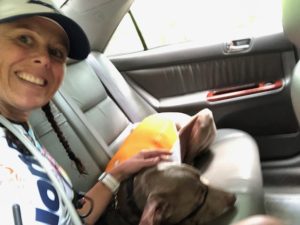 ALWAYS LAUGH, the ladies couldn’t believe I wasn’t in tears (although at one point I was close) but what would panic and tears do? The point I almost lost it was when we couldn’t find the car and I felt like I’d ruined these ladies day. I seriously gave them all the money I had in my wallet and PROFUSELY thanked them.

I WILL go back, and I WILL do the actual course (which is less mileage than what I did, haha), and if you ever want a cool race to do, THIS IS IT. It’s no medal, no shirt, just promised fun. Thank you Susi for getting me out there for your race!