In case you’d rather watch the video of the race report instead, just click here.  Much better scenery.  Haha

I got everything I could out of my bag nutrition wise knowing I was so depleted that even if I could ride, I was going to have to play a game of catch up without puking again. I slowly walked unassisted to my bike, secretly frustrated I was wasting so much time walking, haha! I got out of T1 and am trying to mount my bike when the guy in front of me almost takes me out b/c he’s fallen. Getting on the bike and the first 5 minutes were pretty sketchy, and I’m so sorry to anyone near me. I had faith that if I shouldn’t have been on the course, I’d been pulled. The last thing I ever want to do is impact someone else’s race. The rules I’d been given was don’t turn your head. I also found I couldn’t look down or up, so I just tried to focus on each cyclist in front of me and in that straight eye line. I luckily had a loop that took me right back by the start of the bike where I hear my family yelling. I stopped (almost fell over, such a joke AND caught on video) and gave my son the biggest hug ever and told him mommy was ok and that it was just going to be a longer day.

The bike really was all about focus, I soon realized the HR zones and instructions written on my arm were out the window. My focus had to be on nutritioning quickly yet being smart b/c I couldn’t afford to keep throwing up. I did really well on my 1st hour getting in what I needed, or what was on schedule to do, which was MUCH MORE than for a typical IM, but I’d trained and prepared for this. I tried to take break the ride up into 5 mile intervals, using that as my goal. The way out to Hawi I didn’t feel well and felt like I was travelling in slow motion, I couldn’t look side to side or up and down without getting dizzy so I just had to downright focus PLUS smile enjoy what I was able to participate in….which I did A LOT OF. So many people reminded me to do this, and that was when I was going to have a “normal” race. I embraced it 110% especially with the issues I was having b/c I almost didn’t get to that start line. I was even a little pissy that I wasn’t getting the true Hawaiin experience of HEAT and WIND! I know, I’m a little weird, but it crossed my mind frequent. I kept wondering when it was going to hit. I had many bottles to go thru in the 1st 3 hours, and I’d packed all but 2 with ice, unfortunately it didn’t matter. Even on a great day, they got warm by 2.5 hours if not earlier. Hindsight, I’d frozen all but 3 of my 6 bottles for the 1st 2-3 hours of the ride. I was still battling the nausea from the vertigo so I just started getting creative at aide stations. One pic shows my option for something ice cold….haha! The photographer was there just for me, am I right? Fast forward to the turns towards Hawi turn around, all I could think of is I hoped my Sarah and crew were at the turnaround and had my meds that needed to be called in. I got to the turn around and just wanted to cry seeing them, I stopped (this was a trend, haha!) and realized they didn’t have the prescription meds and told them there was no way I’d be able to run that marathon or even attempt it without meds since I was struggling this bad on the bike. They told me to buck up, get moving, and that they’d do what they could. I hated I was adding extra stress to their day, but just couldn’t fathom more miles feeling the way I felt, much less conquer that marathon. The turnaround was also welcomed b/c I got my new bottles which I’d frozen that had my ideal nutrition in them. Unfortunately, I only got about 2 of them before they turned hot as well. The only good news was my plan didn’t call for nearly the amount of bottles as the 1st half. The other great thing I was look forward to at the turn around was the well known Hawi winds. Jeff and I had ridden it earlier in the week and it was AWESOME. What scared Jeff just made me excited, my coach had well prepared me how to handle the downhill windy section along with a few articles regarding this race so I felt excitement at the thought of having them again. My excitement was for nothing; it became obvious Ironman Hawaii was having the most IDEAL conditions ever. IT WAS A BUMMER! I will say, God and others were probably looking out for me, as the vertigo was challenging enough and I probably didn’t need additional factors adding to my day. The ride back explained why the ride out to Hawi felt so slow, the speed was much faster coming back and it was obvious there was a good tailwind.

As far as drafting is concerned at IM Hawaii, if you’re a female racing at my speed, it’s not an issue. The men start 15 minutes ahead of the women, and I didn’t qualify for this race by being 1st in my age group at another IM like the majority of these people did. So unlike most IM races where I’m an upper middle of the packer, at this race I was WAYYYYYY in the back. So much so that they were opening some of the roads on my way back into Kona.
Back to the rest of my ride, I literally kept myself moving and focused by dreaming of seeing the fam and support crew AND getting meds. I don’t remember the mileage, but I remember rolling up on hill with this random guy standing on the side of the road, and I look a bit more only to realize it’s my dad! I stopped (again), gave him a hug, cried a little, and was surprised to find some more of the support crew right over the hill. No meds, but just the push I needed. Energy wise I started feeling better and like I could push a little more. By mile 104 or so I saw Sarah and crew, and prayed they had my magic juice AND that it’d make me feel better. Sure enough these crazy amazing people were able to come through. Alex, one of my friends, tried to be discreet about what they were doing, and I told them not to worry about it. I was like, this isn’t on the unapproved meds list, and I’d GLADLY take an unauthorized assistance penalty to get through this race. They quickly got this funky thing put behind my ear, and gave me some nauseas meds, and sent me on my way. I FINALLY get to T2 and get off my bike, hand it over, and decide it’s time to test out what this run would be. 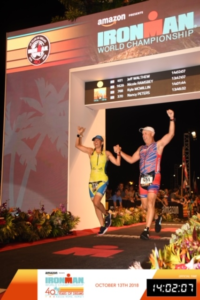 The race was priceless, the fact we had so many friends and family there was simply humbling, and the support I’ve received from Atlanta Bread Co. through each Ironman to get here is crazy, Frigid Cryo to help keep this broken down body moving, and #Lillystrong for her ongoing presence and fighting spirit to keep me moving. My hubby, Heath, you’ve backed me, believed in me, and helped me through 12 years of fighting to each Ironman finish line to get here, and we made it! My parents, you rock! Dad never missed one single IM. Jeff, thanks for coming up with this goal and adventure, it’s been a fun and memorable one I’d not change for anything.
Never give up people, and dreams do come true.