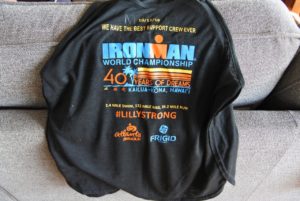 The Ironman World Championships has come and gone, and although I did a video race report, I promised a more complete written report. For those of you that prefer watching a video, I mean the background was amazing, feel free to click here to view

I want to start this with saying none of this would have been possible or gone as smoothly as it did without my hubby and my sponsors.  He kept me on track, supported, and was amazing.  Atlanta Bread, 14 years later and we FINALLY DID IT!  Frigid Cryotherapy, I don’t know if 10 months after back surgery this could have occurred without the services you guys offer.

From half ironman training to the IM World Championships in Hawaii in 79 days was quite the experience. Many people thought we were crazy, but there have been so many personal losses, people diagnosed with major illnesses, and our own injuries to conquer that my bestie Jeff and I decided to accept our slot this year. BEST. DECISION. EVER (for us, at the time). Jeff’s not getting any younger, and I’m still fixing what was broken from last year, and we just don’t know what may happen in the future. I’m not sure if having a full year makes it more real, but it seemed like a dream. I never got overly excited about it, I was in a spot where I had to buckle down and focus on my training, work, and family like never before. There wasn’t time for thinking, haha!

I’m going to speak on the day of IM, I will do a follow up to discuss my thoughts on prepping for this race and how our days leading up to it went and what worked. So….IM morning, I woke up and swung up in bed due to an alarm going off in another room. I felt my head spin, but just laid back down and went to bed. The next time the alarm went off and I got out of bed, I almost fell. I had vertigo. I tried to get ready, I texted my coach, she had me do some relaxing and alone time for a few, and it wasn’t better. It seemed the more I tried to do, the worse it was. She told me to go straight to the med tent, I didn’t want to go, I feared there was no way they’d let me race. I texted Dr. Cassas (my sports ortho who was at the race volunteering), and he jumped into action as usual tell me what to convey to the docs at the tent. Jeff (bestie racing), Sarah, and Heath all devised a plan on how to actually get me to the med tent. Sarah dropped us off while Heath helped me get there. I couldn’t walk a straight line, this was the worst case of vertigo I’d ever had. Only the 3 people above can attest to how bad it was, it was horrific. Jeff knows I’d never NOT do an IM much less Hawaii and he later told me he didn’t think I’d make it to the start. The med tent was pretty empty once I got there, I told them what I needed and was promptly informed no one knew how to do the epley maneuver and the med I needed they couldn’t give me or I’d have to be DQ’d. They said I could take the meds on my own, no pharmacy is open that early, but that if they had to give me anything I was done. A few minutes later the guy came back and said it’d been a while, but he was going to try the epley on me. He established which ear it was in, your eye does something funky when it happens, and he continued trying the maneuver with the required breaks in b/w. Dr. Cassas and myself were going back and forth via text, I think we chatted one time. I broke down on the phone with him, at a loss as to how I could make this happen. My crew got me some Dramamine, and every test the doc would do after the maneuvers I’d still be weaving. The real moment was when I heard the pros go off. Jeff popped in, asked if I needed anything, it was time for him to get in the water. I needed tons if I was going to race, but I just told him to go do his race, enjoy the day, and don’t worry about me. He needed to focus. Keep in mind, I’ve not eaten, I’ve not gone to my bike and pumped my tires and put my drinks up, I’ve not gotten body marked, I’ve not gone through any of the pre race stuff of the morning and the pros have literally already started while I’m in the med tent. I looked at the doc and he said what do you want to do, and I said I’m starting. The volunteers were amazing, they walked me over to the body marking and had them get all the numbers back out of the boxes to get me marked. They then escorted me to my bike, found someone to pump my tires, helped me get my fluid on my bike. In the meantime, I’ve texted my hubby and told him he needed to find me so I could give him my bag and phone, and that I was trying to start. The men have already gone off, I’m still not dressed for the swim and am trying to find Heath, it was really difficult for so many reasons (my mind was not clear). I started feeling the pressure of the time, and when I found Heath I literally grabbed as much as I could out of my morning clothes bag hoping I had it all. I’ve got to say, I have NEVER done an IM and not seen my family prior to and given them hugs and told them how much I love them. You never know what can happen, and they’ve had the unfortunate side of IM, seeing someone pass and be pulled out of the water during a race. My husband was my rock that morning, I know I scared him, I can’t imagine the stress of watching me like that. He made it clear as I stumbled away I had a child to come home to, no pressure! Haha.

I hear the women called into the water around this time, I’m nowhere near prepared. I sit down, get my swim skin on, put in my earplugs, get the swim caps on along with goggles and start my stagger to the start. I get to the start, cross the mat, and realize I don’t have a chip on and I must’ve given it to Heath. There was a tent right at the swim start, they got me a chip and wrote my number down. I entered the water as the women are being sent off (in water start a good 100 meters or more from where I was). The doc said don’t breathe to the right, he’d determined it was the right ear that had the issues. Luckily I’m a bilateral breather, but boy is that tough to do when it comes to sighting and ocean swimming. You need to switch sides depending on the swells and such. I caught up to some women and it was a nice distraction. I was pretty nauseous, but forged on. Just focus. I told myself if I could make this swim, I can figure the rest out. Then……I’m at a point where I’m so nauseous I have to stop and puke. Puking takes it all out of me, I could never be bulimic b/c I’d be on the floor all day. I notice there are 4 buoys left, and think, REALLY, NOW?! I swam a few more strokes, stopped and puked some more wondering if this swim was possible to complete. I was so upset. I thought of Lilly, she never gave up, she was already pretty tough on me with all my injuries reminding me to suck it up with no sympathy. So I remembered what I used to tell Sarah when she HATED me on the Halloween Hunerd bike ride, you can always go slower….just try going slower and see what you can do one stroke at a time. It worked, I was able to make forward progress, which in IM is the MOST IMPORTANT THING. I questioned myself throughout the rest of the swim, but finally got to where I could stand up. I remember seeing volunteers in the water and Scott Rigsby (1st double amputee to finish IMHI) and he had a huge smile, I teared up and asked for a hug. We’d gotten to be friends, and he’d had no idea of my morning, but later told me how bad I looked. His friendly face and hug saved me, I was struggling bad. I don’t know how I made it out of the water without falling b/c the swells and my vertigo were not a good pair.

I slowly got out of the water and on my way to T1 I stop at the tent that gave me my chip and ask them to verify that my chip is updating on the system and even explain I’d been in the med tent all morning and that my family will be concerned if it’s not. They assured me it was fine, only later did I find out it wasn’t updating anything. A few seconds later one of the volunteers who’d assisted me earlier saw me and came to my rescue to help me get to transition and take care of me. I can’t say thank you enough to those volunteers. I was a hot mess.