The last 2 months have been jam packed whether it be with work, racing, or work again.   Health wise I’ve felt improvements, yet still don’t feel myself.  I did think this week was worth talking about and celebrating though.

I had a lot of big things that were finally past me, work wise the Man and Woman of the

Year campaign was complete (raised $100,000 OVER budget) and Light The Night Corporate Cocktail Event was successful…..I finally felt like I could breathe.  These two events are huge for me, and can be all consuming.  I had my follow up with the hematologist to see how all my crazy blood work responded the iron IV’s.  The good news was that my iron is up, my storage of iron is finally above the teens and over 100!  Woot woot!  There are still some abnormalities that we’re trying to figure out, but I’ll take any good news I can get.  I bought a new bike……I feel like I might throw up every time I say that.  I don’t buy new bikes just for the heck of it, but www.Trisports.com (ask for Tony) found a deal I couldn’t refuse.  So what does a girl do with all this good news?!  Sign up for a gut wrenching throw up inducing short sprint tri, otherwise known as Caine Halter Sprint Tri.  300 yard swim, 9 mile bike, and 5k run.

I got my bike Thursday, put it together, fit it as best to my abilities as possible, and rode it like I stole it!  My hubby asked how it was, my response was it’s like going from the Kia to the Jeep Cherokee.  I had no idea that my bike wasn’t awesome (my old bike is still awesome) until I got a new bike, that thing was AMAZING to ride.  Knowing I had a new bike and that my iron was good gave me a little more confidence to push this sprint.  I’ve been so scared to push things b/c of the price I’d pay and unpredictability of how I’d feel, but I’d decided to throw caution to the wind.  Don’t get me wrong, I’d pushed before, the times just didn’t reflect it and I’d feel awful afterwards.

The swim is a pool swim, and seeded start.  I got to start next to my favorite 10 year old Evan.  Evan and I bonded over the winter during a half marathon, okay….Evan and my dog bonded over the half marathon.  I was simply thereJ.  My favorite pre race song Lose Yourself started to play and all I could think about was the new video showing the sign language version of this song.  Epic.  I’m suddenly up to go, and the time has come to focus.  I tried to swim moderately instead of hard mainly b/c in workouts and races I know I have about 300 before my arms get tired and fatigued, so sprinting was not an option for me.  I finished the swim, and was just happy the fatigue had not set in like usual.

I ran into transition and went to the wrong rack, there’s always a 1st!  After finding my rack I hopped on the new steed and started to hammer away at the 3 loop crit style course.  I managed to accidently hit the lap button on my garmin, so I was essentially riding naked which was fine.  It IS a sprint.  The bike felt phenomenal, the shifting was like slicing butter, the cornering was comfortable, and my favorite part was I didn’t get tossed around on a somewhat windy day.  I finished the bike feeling good about my effort, and hoping that I didn’t pay the price on the run. 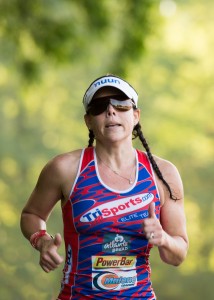 T2 went much better, and major props to Justine Waldrop for loaning me socks.  Yes, I put socks on in a sprint!  Hate all you want, but I still have some of the fastest transition times even with socks (provided I know where I’m goingJ).  I knew the 1st .25 of a mile was uphill so I tried to give it the good old hard effort yet know that the hill was not short.  The next 1.5 miles is downhill to flat.  I refused to look at my watch and just went off feel.  I was working hard and passing a person or two, but I had no idea if I could hold it.  Once I hit mile 2 I stopped and walked and took water, then committed to giving the last mile all I had.  I know this course and the last .4 mile is uphill, and ALWAYS makes me suffer even on training runs, but I was committed.  I was leaving it all out there.   I rounded the LONG circle to make it to the finish line, and have never been so happy to be done!  I finished about 30 seconds off my 2012 time (bad run that day though), and wouldn’t know my splits until hours later.  I forgot my garmin was on run for the entire bike and run so didn’t even realize I could check that.  Later when I saw my run split at 23:47 I was elated.  I never thought I’d be so happy to see that kind of 5k time, but these past 6 months have been rough.  The garmin showed my 1st two miles at 7:38, 7:45, and then finishing w/an 8:01.  I’m not “back” but I’m seeing a glimpse of my old self coming out. 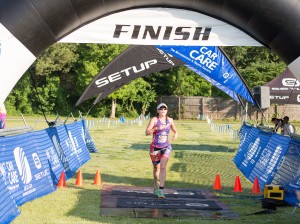 Coach’s orders, get my stuff together (workout wise) and focus on me during workouts.   I chose to do this for the race as well.  I typically have Addison and/or dogs in tow but for those couple of hours I enjoyed my time with friends and focused on me.  Major thanks to my hubby who wasn’t exactly mobile, and still took care of Addison while I raced.